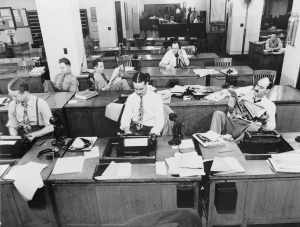 Have you ever watched a TV drama in which an unscrupulous journalist has done just about everything possible to get THE story? The tired portrayal of a hard-nosed hack is trotted out by many a scriptwriter, cementing the image of a person who would quite happily sell their own grandmother in exchange for a crumb of a story which would make a front page. I remember watching an episode of Doctor’s once (I was off sick, although that’s no excuse, I know) in which a rookie reporter desperate for the tale stuck their foot in the front door frame of a grieving mother’s home in order to be let into the property. On being shoved back out of the house the reporter then proceeded to shout threats through the letterbox before going on to publish a pack of lies on the front page of their local paper. Note to non-newsroom readers, this is NOT what happens in real life. In real life most reporters (not all, admittedly) follow a code based on law and ethics which would have seen them politely ask if the grieving woman wanted to pay tribute in the paper. If she said no the reporter would then leave and not return. They would not go on to print a lot of made up stuff in order to get revenge for the lack of story, but instead might file nothing, or might report the basic facts provided by the police or coroner. But sadly, due to some unscrupulous journos, some unimaginative scriptwriters and one very long Leveson Inquiry (which put all journalists on a par with the serpent in the Garden of Eden, bankers and expense-fiddling MPs) the reputation of journalism and the industry has become very shaky indeed.

So, in my mind it is excellent news that the Newspaper Society – which represents local and regional press – and the Newspaper Publishers Association, which acts on behalf of national press providers,  is to merge to form a ‘united voice’ for the industry, as reported today on Hold the Front Page.

In an ever changing world in which news is being accessed by a growing audience in myriad ways it makes sense to tackle issues that challenge all newspapers as a united front. Leveson may have barely touched upon regional news provision during the inquiry, but the fallout of the hearing was strongly felt in newsrooms up and down the country. I felt it keenly as the editor of a weekly newspaper at the time; despite working hard as a campaigning newspaper, celebrating the community we served and supporting businesses, charities and good causes, I was regularly quizzed about my thoughts on ethics, my team and their reporting methods. One occasion (when a trainee reporter had failed to adequately cover a charity raffle story) I was told all I cared about was selling papers and asked quite aggressively asked ‘how can you sleep at night?’ (I did point out this was a bit of an overreaction and the accuser did apologise, but it stung all the same).

I do think things have improved. Time is a great healer and most editors work hard to make sure their teams behave in an ethical way which reflects well on them as individuals and on the newspapers they work for as well. I don’t think a unified board at the time of Leveson would have stopped the perception of journalism being a crooked practice, but it would have strengthened the voice, experience, values and opinions being provided by  the industry as the counter balance. It would have allowed regional news providers to seek support and fellowship during difficult times and it would have shown the vast extent of the ‘good’ journalists against the handful of ‘bad’ who had so damaged the industry’s name.

I do have to say though there are still huge mountains to be climbed in the industry. It is a real shame and quite indicitive that in representing an industry of thousands, there is only one female board member. Local World’s Lisa Gordon sticks out on the list of white men in suits like a sore thumb. Jeremy Spooner is correct in saying ‘the news media industry is a diverse and vibrant sector’ but while the new board represents the bredth of publishers in terms of  ‘family-owned local newspapers alongside large national titles’ it is also sadly representative of the inbalance of men to women running these companies. Let’s hope that the board recognises the mirror it holds up to the industry and works to implement change in order to bring more diversity into newspapers’ workforce and senior management structures.